Where do I even begin with J.J. Cale? In remembering the legend on his birthday like this, in this short post, I’m paying my tribute to him, however insignificant it may be. But his influence on my music is much more significant, way more significant. That is the inherent, unerring, unspoken power of a musician influencing another. It’s something that J.J. seems to do effortlessly and substantially and something he has done throughout his lifetime. Such is the man, such is his music and such is his legacy.

J.J Cale is probably the most essential, inspiring and influential artist to come from the United States since Elivs, from way back in the ’70s, up to right now in 2019, yet so few have heard of him, except all those who have paid attention to his obvious electric guitar genius. He’s the man who brought the cool finesse and clean sound to Rock and Roll through the years and never compromised on his classic, eclectic, trademark sound.

The originator of the Tulsa sound which is a niche, loose genre drawing on blues, rockabilly, country, and jazz, J.J. Cale’s discography of 15 studio albums spans five decades of smooth electric Rock and Roll. His remarkable sound stands out distinctly in the vast ocean of classic rock and is perhaps the smoothest and most groovy sound in Rock and Roll history.

Born John Weldon Cale, on 5th December 1938 in Tulsa, Oklahoma, he adopted the stage name J.J. Cale to avoid confusion between the Velvet Underground guitarist John Cale and himself.

Although he wantonly averted the limelight throughout his lifetime, he is heavily regarded by a diverse range of great musicians as a very important and widely acknowledged behemoth of Rock and Roll. The greats such as Mark Knopfler, Neil Young and Eric Clapton, describe him as “one of the most important artists in the history of rock”.

In Neil Young’s 2003 biography Shakey, Neil says, “Most of the songs and the riffs – the way he plays the f***ing guitar is so… great. And he doesn’t play very loud, either – I really like that about him. He’s so sensitive. Of all the players I ever heard, it’s gotta be Hendrix and JJ Cale who are the best electric guitar players… musically, he’s actually more than my peer, because he’s got that thing. I don’t know what it is.”

Personally, as a guitarist and musician, J.J. Cale’s influence is pivotal to me. He’s someone whose sound I want to recreate while amalgamating it with my own sound and his guitar playing style is something I try to learn from and replicate. Irrespective of what I’m doing, having J.J.’s tunes playing on my sound system and grooving to it thinking, ‘Damn! J.J.’s stuff is so smooth’ is a typical weekly wind-down procedure for me.

In the documentary ‘To Tulsa and Back: On Tour with J.J. Cale’, Cale’s guitar style is remarked by Eric Clapton as “really, really minimal” and “all about finesse”.

J.J.’s finesse and prowess on the electric guitar is widely revered by artists and musicians to this day.

His songs have gone on to be widely covered and played by artists across the spectrum of music. The song ‘Cocaine’ popularised by Eric Clapton was originally written and performed by J.J. Cale. ‘Call Me the Breeze’ went on to be covered by Lynyrd Skynyrd, John Mayer, Johnny Cash and more. While ‘Magnolia’ was also covered by Beck, Iron & Wine, José Feliciano, Ben Bridwell and John Mayer with Eric Clapton.

Perhaps J.J. Cale’s most noteworthy highlight moment came towards the tapering end of his career in 2008 in the form of a Grammy award for his album ‘Road To Escondido’ with Eric Clapton.

In an NPR interview about ‘The Breeze'(A Tribute Album to J.J.), Clapton discussed Cale’s unique playing style and his influence on him:

“I wanted to… try to find a way to make it minimal, but still have a great deal of substance. That was the essence of JJ’s music to me, apart from the fact that he summed up so many of the different essences of American music: rock and jazz and folk and blues. He just seemed to have an understanding of it all… I regard him as one of the roots of the tree of American folklore… Making this record was a way for me to say thank you for all the inspiration over the years. I suppose at some point I started to feel mildly outraged that he hadn’t got the recognition that, at least I thought, he should have had.” 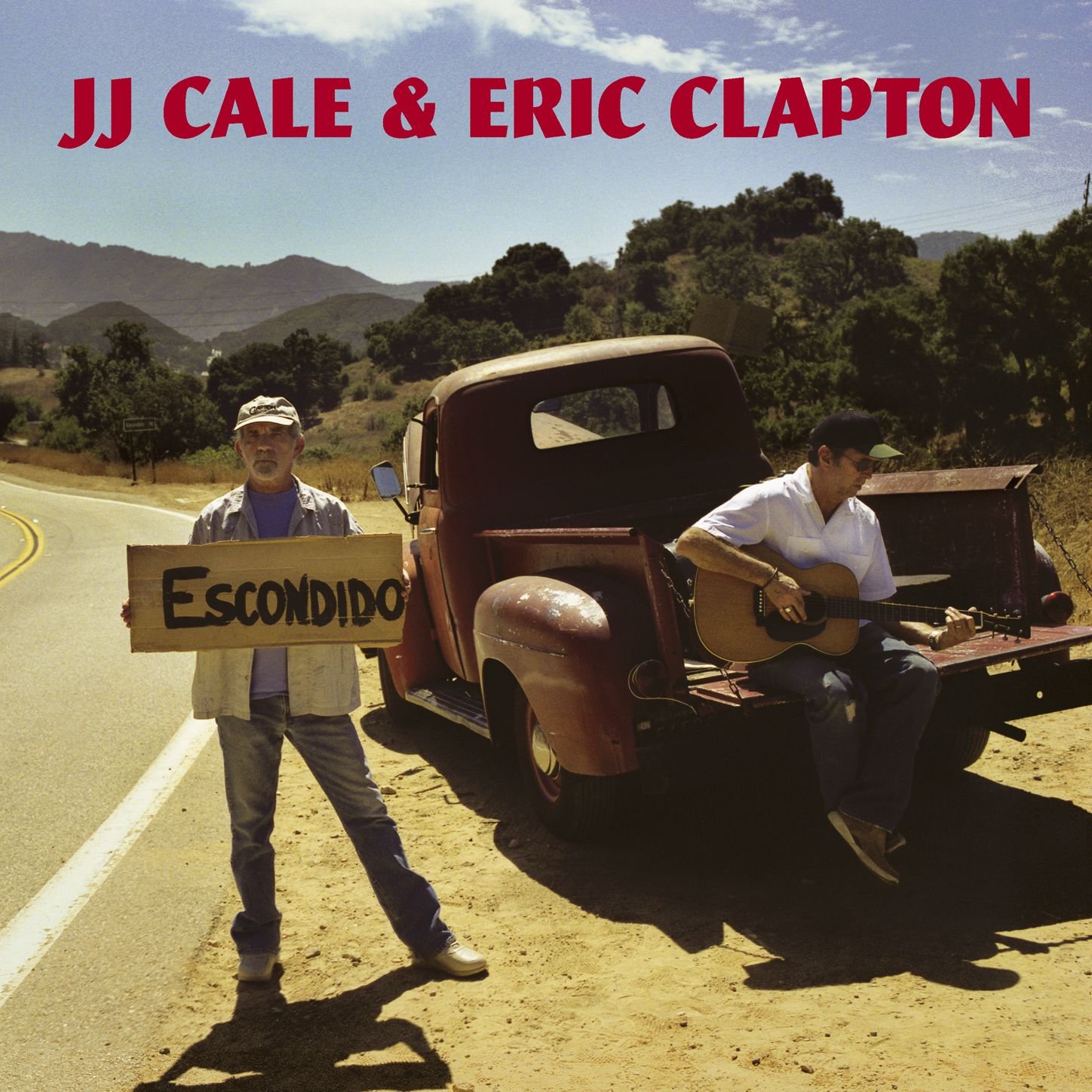 Although he didn’t push as much product as Clapton or garner anywhere near Clapton’s fame and success, his influence, lyrics and playing style remains exemplary, classic and a much sort after speciality to every musician and music fan who has heard his music.

Cale passed away on 26th July 2013 but his smooth, sombre guitar sounds roar on, linger and ‘hang out’ through the night just like he sings in his song ‘After Midnight’. After his sad demise, Rolling Stone stated that “his influence is immeasurable,”

J.J. Cale remains a virtuoso who was highly underrated by mainstream media until very late on in his life. His albums though, echo the classic Tulsa sound and his impeccable flowing guitar playing style. His effect on listeners remains appreciable and his music is something to cherish in the years following his demise.

On his official website it reads: “Even though Cale received great recognition from his contemporaries and, as time went on, other rising stars, his nature was to always avoid the spotlight. JJ Cale was absolutely one of a kind in the music business. His impact was immeasurable but, as he intended, his personal life remained very much below the radar. Cale enjoyed being the person who focused on the crafts of writing, engineering and production rather than the pursuit of commercial success.”

“While he has now passed on, we are fortunate that he left behind music that has and will continue to comfort us the rest of our lives. And Cale’s broad influence will surely be reflected in plenty of new music made by others for decades to come.”, it adds at the end of his biography.

If you haven’t already, check out his official website: https://www.jjcale.com/

His albums ‘Naturally’, ‘Troubadour’, ‘Okie’, ‘5’, ‘Grasshopper’ and ‘To Tusla and Back’ have been in my collection and on repeat for years now, not to mention the epic ‘Road To Escondido’ with Eric Clapton. I suggest you purchase his entire discography or stream his music online to sit back and let those cool, smooth vibes and grooves that only J.J. Cale can create, sink in.

He sings in a whispery baritone emulated by Mark Knopfler years later. His guitar-slinging though, stays true to original J.J. Cale all the while. His voice is a deep, whiskey greased one but don’t let that throw you off; his country-blues-rockabilly compositions are so full of shifting rhythms and slippery guitar licks that you can never want the end of them. Cale’s music and simplistic yet effective style of guitar playing never fail to get you grooving.

Here’s a Spotify playlist handpicked by me, with my favourite tracks of his which you can listen to here:

Here is the link to his posthumous album ‘Stay Around’, released in April 2019, on Spotify

Here is an essential live performance: JJ Cale & Leon Russell at the Paradise Studios, LA in 1979

Here is J.J’s album ‘To Tulsa And Back’ on my YouTube channel BOMBEATS

Here is the song Devil in Disguise live:

And here is ‘After Midnight’ Live from the LA Paradise Studios set with Leon Russell, which is better than the original:

J.J. Cale might have passed, but his legacy, everlasting inspiration and his expansive repertoire live on in the form of his music.

Happy Birthday to the legend and the one and only J.J. Cale.

View all posts by gauravkrishnan

Mark Knopfler - Kingdom Of Gold(Cover) Love this song by Mark Knopfler off his album Privateering. Finally got around to covering it. Check it out🤟🏼🎸 #markknopfler #privateering #singersongwriter #folk #folkmusic #guitar #acoustic #acousticguitar #acousticcover #folksongs #music #musician #musicians #musicianlife #musiciansofinstagram #guitarist #guitarists #guitaristsofinstagram #musique #musica #markknopflercover #song #songs #songwriter
The Verve - The Sun, The Sea (Cover) Re-upping. First cover after my holiday. Dig this song a lot. One of my favourites by The Verve. Put some trumpets in there too (despite sucking at it) just like the intro of the original. Great to be back! 🤟🏼🎸 #theverve #britpop #britpopcovers #singersongwriter #music #musician #musicians #musique #musica #alternative #alternativerock #britrock #rock #rocknroll #richardashcroft #rockmusic #rockcover #musiccovers #musiccity #musicartists #musiclife #musiclove
It's the biggest game of the season. @chelseafc Vs @fcbayern Here's a short version of the @championsleague theme on #piano🎹 Can't wait to hear this at kickoff. Hyped. Come on Chelsea!! #CHEBAY #CHEFCB #UCL #cfc #coyb #chelseabayern #chelseafans #music #football #uefachampionsleague #championsleague #chelseaindia #chelseafc #bayernmunich #chelsea #london #sw6
%d bloggers like this: